Friday nights are rockin' at The Vancouver Rowing Club!  Downstairs in The Carver Room, an English style pub, folks enjoy appetizers, hearty meals, and drink specials to go along with the stunning view of Coal Harbour.

They also enjoy an evening of live entertainment courtesy of Vancouver City Limits!  From 7:30 - midnight,  VCL Producer, Bruce Gerrish, takes the stage and hosts a talented line up of emerging local artists.

I had the pleasure of interviewing two of those artists for the April 23rd show... Adam Gibbs and the band Illiteratty.

Adam Gibbs is an intuitive singer-songwriter originally from London, England and now living in Vancouver. He is unsure about many things, but one thing he is sure about is he loves a good melody. He spends many hours hunting them down on his guitar and when he thinks he's found one, he likes to share it with people. 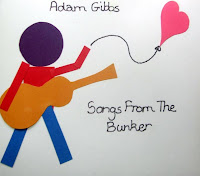 I'm so glad Adam Gibbs was at The Rowing Club last night to share his songs with us.  His melodies are indeed infectious, and his delivery, unassuming.
I sat down with Adam after his performance and found him to be a really nice guy.  Humble, even.  He's been writing songs about 5 years, and only performing for 2, but his quiet assuredness on stage makes that seem impossible.  He calls his music Folk Pop, and a stand-out song in his set was the radio-friendly 'Shades of Grey.' 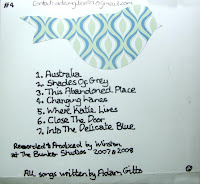 A new Father to 8 month old Poppy, the 30 year old singer/songwriter finds time to write and perform, but has had to put plans for a band on hold for now.  Something tells me it won't be for long.  After listening to his CD, Songs from the Bunker, I get the feeling that having his songs fleshed out with full instrumentation is how he hears the songs when he writes them.  Just a hunch, based on how melodic and catchy they are.  I particularly enjoyed the lilting 3rd track, This Abandoned Place.

When asked about his writing inspiration, Adam revealed that living an authentic life and trusting his inner voice and intuition are what matter to him.  In his writing, he uses imagery, metaphors, and is sometimes really direct.  Drawing from his life experiences, he writes from the heart, while managing lyrics relatable to all.
http://www.myspace.com/adamgibbsband 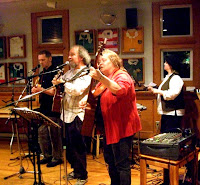 It seems that the members of Illiteratty were destined to play music together.  23 years ago, Songwriter/Vocalist/Guitarist Earle Peach and Mandolin player Albert Klassen played in a band called Natural Elements.  A couple years ago, they reunited musically, and 6 months later, Bass player Wanda Mundy joined in.  And just a few weeks ago, the 'newbie' in the band, Percussionist Revellie Nixon, hopped on board, not having seen Wanda since their days in a local band together some 20 years ago.
Together they breathe new life into Earl's beautiful songs, with a rich, warm sound that wins over audiences...from the listening crowd to the pub crowd.  They call their sound "Hypno Folk", or "Psycho Folk", depending on who in the band you ask!  Whatever you call it, they had 'em going Friday night at the Rowing Club during their Vancouver City Limits Showcase.  Up and dancing and yelling for encores.  (They really are that good.)

Earle, who currently directs 3 choirs, has been writing songs since he was 12 years old, yet feels he is still learning.  He has written more songs than he could ever perform in one show, and as a group, Illiteratty has a night's worth of tunes.   He crafts his songs with imagery, sometimes using humor, sometimes yearning, sometimes just a good story, to reach people.

He'd always envisioned a band with 2 men and 2 woman, saying it keeps the energy light, and indeed the harmonies balance out just perfectly. 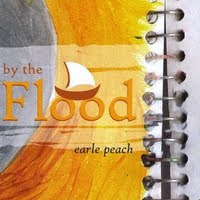 Illiteratty will be embarking on tour to the North end of Vancouver Island at the end of June 2010.
Recently, a band from Cincinnati, Ohio, contacted Earle, saying they were going to be in town, and that they really liked Illiteratty's sound, and asked if they would like to share a show in July.  Earle told them he would consult his fellow Illiterats!

I sure look forward to hearing Illiteratty again, and look forward one day soon to buying their CD.  Earle Peach's CD, By the Flood, is a beautiful 15 song collection, available online at CD BABY
Hear more songs on myspace:  http://www.myspace.com/illiteratty